Celia Stroom (Paris, 1983) is a multidisciplinary artist in the full swing. Throughout her life, she has managed to study several disciplines and work in all of them, creating a multifold artwork. After completing Masters and BA at Sorbonne University and Paris conservatory in Museology, Cultural Management, Contemporary dance, Sound studies & Opera singing, she dedicates her work to the exploration of the neurological phenomenon of synesthesia in several kinds of artistic experiences, film, literature, performances and exhibitions. In her work, music is not considered as an additional decorative layer to the images, but rather as a chemical fusion of sound and moving images. The artist lives and works in Berlin where she leads Heroines Wave, an international network of artists where sound, image and body are at the core of a psychological research and artistic program that proposes alternatives to the disappearance of intimate and sincere communication in our individualist contemporary society.

"Music was like breathing, walking, making love, just an essential ingredient of life, present everyday for these last years I spent with the film director Salomé Jashi. Because of our common sensitive and meticulous perception of the environment, I felt instinctively what she wanted to express through these images of trees floating on the Styx towards the doors of Hell. I was continuously seeing in front of me paintings of Jerome Bosch, Patinir or Brueghel when I went to observe and listen to the real sounds of the filming sessions. Then musics appeared in a natural flow, the synchrony of the sight and the hearing was weaving in the brain these images, their tempo, textures, colors. And often sounds and musics were stronger than silence in my mind, they were the scream of these trees, and finally the scream of the director It was an empowering adventure to face these episodes side by side with someone who shares common values about a world in pain."

Goga Devdariani is a Leningrad-born cinematographer living in Tbilisi, Georgia. He was the cinematographer for MEDIATOR (2007/2008) by Dito Tsintsadze and A FOLD IN MY BLANKET (2013) by Zaza Rusadze, the opening film at Berlinale’s Panorama section. Together with the director of TAMING THE GARDEN, Salomé Jashi, he contributed to the cinematography of THE DAZZLING LIGHT OF SUNSET (2016).

"Every new film is a new experience for me. Working on TAMING THE GARDEN, this experience was significantly different. An unordinary story, which witnessed, an enchanting atmosphere, machines penetrating the nature, men unearthing huge trees, people holding a wake as they'd bid farewell to their trees, 100 year old trees uprooted from their earth... all of this was a metaphor."

Chris Wright was born in the Northern English town of Bolton, studied in Cambridge and then at film school in Babelsberg. Since the mid-90s, he has lived in Berlin, working as an editor and documentary-maker. His recent credits include Thomas Heise's HEIMAT IS A SPACE IN TIME, which won him a nomination for the VG Bildkunst Editing Award. In 2017 he won the German Camera Prize in the category best feature-length editing for Susanne Binninger's FIGHTER. He teaches the documentary course at the German Film and Television Academy (dffb) and works as editing consultant on documentaries and fiction films. His own documentaries (together with Stefan Kolbe) have been shown at festivals worldwide. Their new film, ANAMNESIS, will be released in 2021.

"The biggest challenge with this project was finding a structure. It has no recurring characters, no clear story, no narrative thread to build it around. There are a few trees that reoccur, but it is pretty difficult to recognize them as such. So there are lots of disparate scenes, hundreds of hours of them! It is difficult to express what the guiding principle in editing became, but it has to do with atmosphere and with style. In all that material, it was important to find those shots where everything seemed to fall into place - the single images that ARE the film. I'd say there is a hierarchy of shots in the film, with maybe a dozen of these key images spread throughout. At the top of this hierarchy is the wide shot of the tree on the barge, crossing the sea. The goal of editing was creating the structure and context for those images. Put most simply, that moment when you let that picture of the tree on the barge hit the screen has to be heart-stopping. It has to be the moment when people feel this film."

Philippe Ciompi is a film sound designer and dubbing mixer active in Britain, Switzerland, China, France, and other countries. His work explores the ways in which sound creates perceptual networks of space and time. He occasionally also works as a film editor, composer and sound artist, and is a visiting lecturer for sound design at the Royal College of Art and Goldsmiths College in London, as well as at HEAD in Geneva. Recent projects include collaborations with directors such as Salomé Jashi, Ben Rivers & Ben Russell, Jumana Manna, Dieudo Hamadi, Elene Naveriani, Andrew Kötting, and Sarah Vanagt, among others.

"It was a great honour and pleasure to work on this stunning story with Salomé, elaborating approaches and methods to make the crazy journey of those trees as physical and gripping as possible. Orchestrating the sounds, creaks, chainsaws, moans and whispers of trees, places and people, creating the mad garden’s fake bird orchestra, all those were intense moments of shared creation, aiming at making the film strong, heavy, funny and tragic all at once. A joy."

Tamar Mshvenieradze has been working in Georgian Public Broadcaster as a producer and reporter of various factual and reality TV Programmes for the last 10 years.  She is also a freelance researcher and producer engaging with different local and international productions and media platforms. TAMING THE GARDEN by Salomé Jashi is one of her recent collaborations where she worked as a researcher and at times as a second crew director. Tamara also makes her own documentaries. Her short LIFE OF HER OWN co-produced with CHAI-KHANA MEDIA premiered at CinéDOC Tbilisi Documentary Film Festival and received two awards including Focus Caucasus Jury special award. In 2017 she co-founded production company ‘Act Media' focused on documentary film, multimedia, and social impact storytelling.

"Flipping through my pocket note-book, I realized that it had turned into an endless and chaotic palimpsest of names, addresses, indications, and random notes. This material was piled page by page during our search for every other next tree destined to be sold, uprooted, and transported to one specific place.  The future will replay in its own ways all these stories, collected by us and connected to this ridiculous caprice of one man. As a lot had been said about this extraordinary occurrence, a lot more had been interpreted against or in favor. I was overwhelmed with these facts and myths; it was a temporary condition though. What lasted longer is an emotional state - excitement and dizziness, sense of motion sickness and disconcertion  I experienced during this incredible journey. Followed by the frustration of realizing that the journey leads us nowhere - only to the decorative replication of the living world."

Vadim Jendreyko is a director, author and producer living in Switzerland. In 2002 he and Hercli Bundi founded the film production company Mira Film-Gmbh (Zurich and Basel), which focuses on the development, production and exploitation of independent documentaries for cinema and television. With his feature documentaries BASHKIM and THE WOMAN WITH THE 5 ELEPHANTS he won as a director the Swiss Film Award for Best Documentary (2002 and 2009) and received nominations for the German Film Award and the European Film Award in addition to numerous festival awards. Vadim supports numerous film projects as an advisor, teaches at film schools and is engaged as a mentor for international workshops such as dok.incubator. He is a member of the Swiss Film Academy and the European Film Academy.

"Salomé's compositions of trees being uprooted and pulled across the landscape have a very immediate, archaic power that I couldn’t resist. Moreover, this monstrous process illustrates a very fundamental phenomenon that nowadays is heading towards a dramatic peak: the loss of any measure and the loss of humility when it comes to realising one's own interests.In this project, Salomé followed her inner meridian, which I felt throughout my collaboration with her and appreciated very much."

Erik Winker has been working in the field of documentary for over 15 years. In 2008 he was a co-founder of the production company HUPE Film which is now running under the name CORSO Film with offices in Cologne and Stuttgart. The company has produced a wide range of successful and award-winning documentaries such as "Work Hard Play Hard" by Carmen Losmann, “Searching Eva” by Pia Hellenthal, „Lost in Face“ by Valentin Riedl or „Happy“ by Carolin Genreith and has been a co-production partner for films such as “Acasa, My Home” by Radu Ciorniciuc, „A Woman Captured“ by Bernadett Tuza-Ritter or „15 Corners Of The World“ by Zuzanna Solakiewicz.Erik holds teaching assignments at the University Of Applied Sciences Mainz and the ifs Cologne. He is working as a tutor for international workshops like Dok.Incubator, Ex Oriente and Documentary Campus and is a regular member in festival and funding juries. He´s a former chairman of the regional filmmaker´s association Filmbüro NW, a member of the German Film Academy and a founding member of the Documentary Association of Europe (DAE). In the summer term of 2021 he´s a stand-in professor for documentary at the University of Applied Sciences Mainz.

"I remember well when Salomé told my company partner Ümit Uludag and me about the project for the first time. It was in the festival centre at DOK Leipzig (back in the days when we could still meet in person) and Salomé showed us a short clip from the internet where a tree was moving across the sea. It was absolutely stunning and Salomé was wondering whether this could be a good idea for a short film. Well - we are happy that she decided to make a feature length film in the end. I always loved Salomé´s artistic approach to documentaries and I´m extremely happy that we could team up now with her for the first time. It´s been a great pleasure to work in our Swiss-German-Georgian team - a perfect co-production match both on a personal and on a professional level. Thank you very much to everyone involved!" 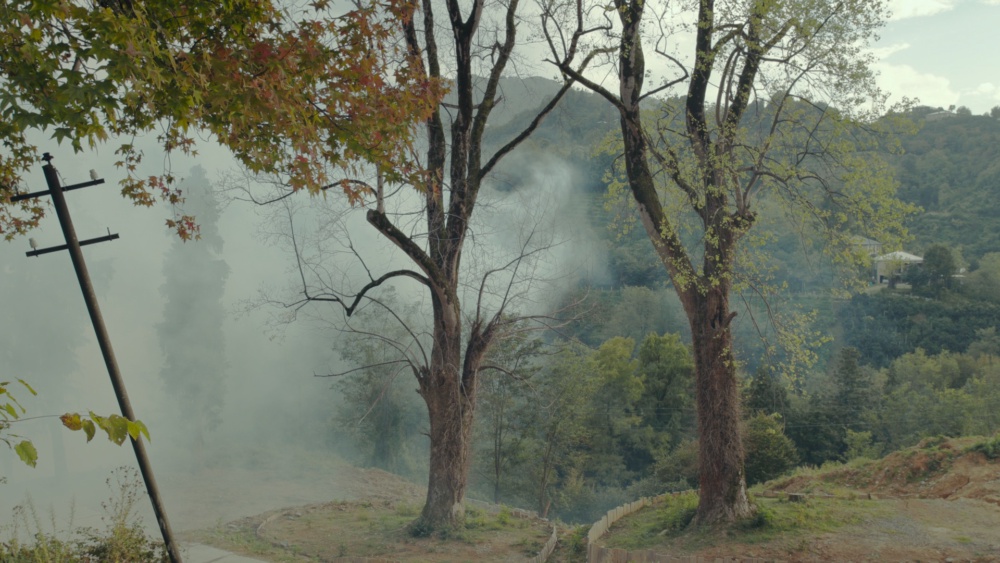 A large tree floating in the sea
We were filming for almost two years. I would travel with my small team to the coast each month to try to capture elements for the film.
Read story