Some time ago, the entire country of Georgia witnessed a surreal scene – a large tree floating in the sea. That was when we learned that the most powerful man in the country had a new passion – to own century-old trees on his private estate.

Witnessing this image was like seeing a glitch in the real. It was as if I had seen something I should have never seen. It was beautiful, like real-life poetry, but at the same time it seemed to be a mistake, a kind of discomfort.

I embarked on filming this process as Georgia’s whole coastline was involved in implementing one man’s desire. I wanted to explore what was behind this mesmerizingly strange image; to tell about the ambition of a powerful man, who alters landscapes, moves trees, leaves witnesses perplexed – all for the sake of his pleasure.

I am fascinated by environments and how these environments affect people. More precisely, how we perceive others, and ourselves, in specific environments. The contradiction between settings and the people in them is what often drives my vision.

To me, the film does not have a one-dimensional line as to what it is about. The material spoke of many different aspects of life, which found symbolic expressions in the film, such as the idea of manhood, or forced migration, or uprooting, which is not just a physical process. I also relate the theme of uprooting to my country, where values and a sense of stability is constantly floating. I see the film as an evocative journey into a surreal world, which paradoxically is also fact-based.

We were filming for almost two years. I would travel with my small team to the coast each month to try to capture elements for the film. It was a challenging process as nothing was properly planned. We were dependent on the natural elements like wind, rain, unexpected circumstances in the workers’ routine, even the general political situation of the day. The process of transplanting trees was very slow and key elements would happen very fast. But the biggest challenge was connected to the local inhabitants. Since the wealthy man behind the scenes is also the most politically powerful man in the country, they were often scared to even appear in front of the camera fearing possible consequences, the fear which we, like other fragile democracies, have in our blood. 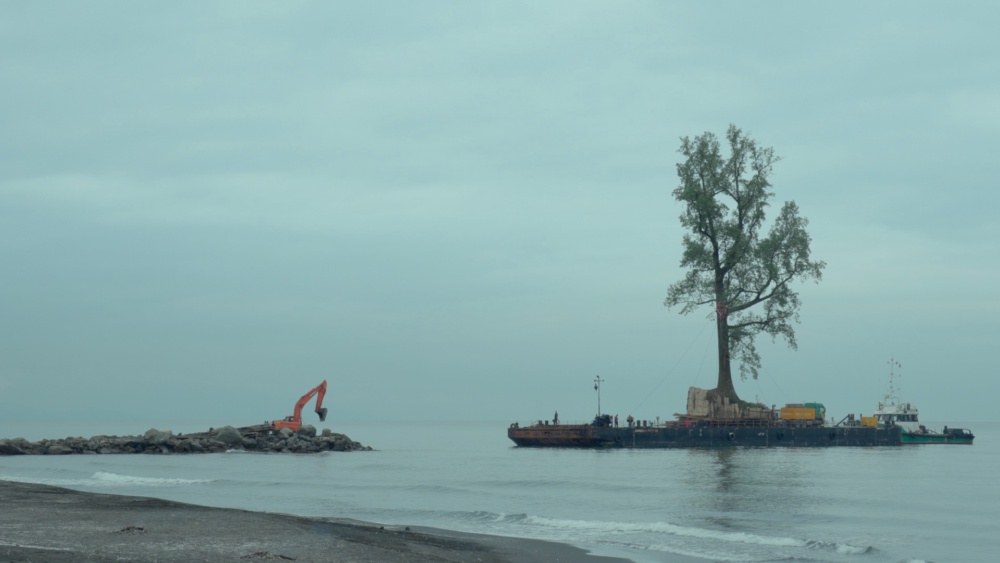